Will the scorching Indian summer provide respite from COVID-19?

Despite its ferocity, an Indian summer is a much anticipated time of the year. It marks the beach holiday season, an end to an arduous wait for mangoes and a time to build up our stash of pickles and papads. However, this year’s anticipation for summer is more in the hope that the scorching heat might lull SARS-CoV-2 infections and bring back a semblance of normalcy to our lives.
This premonition stems from the fact that some viral diseases are seasonal in nature. For example, the influenza virus that causes flu is well known to withstand cool and dry conditions, which is why flu cases are widespread during winter months. Similarly, past outbreaks caused by the coronavirus family of viruses were also seasonal.
To predict whether SARS-CoV-2 infection might oscillate with seasons, scientists are trying to understand the environmental conditions where SARS-CoV-2 performs at its best.
In a study published in The Lancet, researchers show that the SARS-CoV-2 is unstable at higher temperatures. The viral particles were kept in a liquid formula known as virus transport medium at 5 different temperatures ranging from 4°C to 70°C. They then tested its infectivity index at various times from 5 minutes to up to 14 days. They found that at the coldest temperature of 4°C (the temperature inside of your fridge), the virus was stable for as long as two weeks. At more realistic environmental temperatures such as 22°C, the virus was infectious for up to a week. When tested at human body temperature of 37°C, the virulence of SARS-CoV-2 was quenched after one day. However, the virus lost its infectious capability within a matter of minutes at higher temperatures of 56°C and 70°C, indicating that it succumbs to heat. 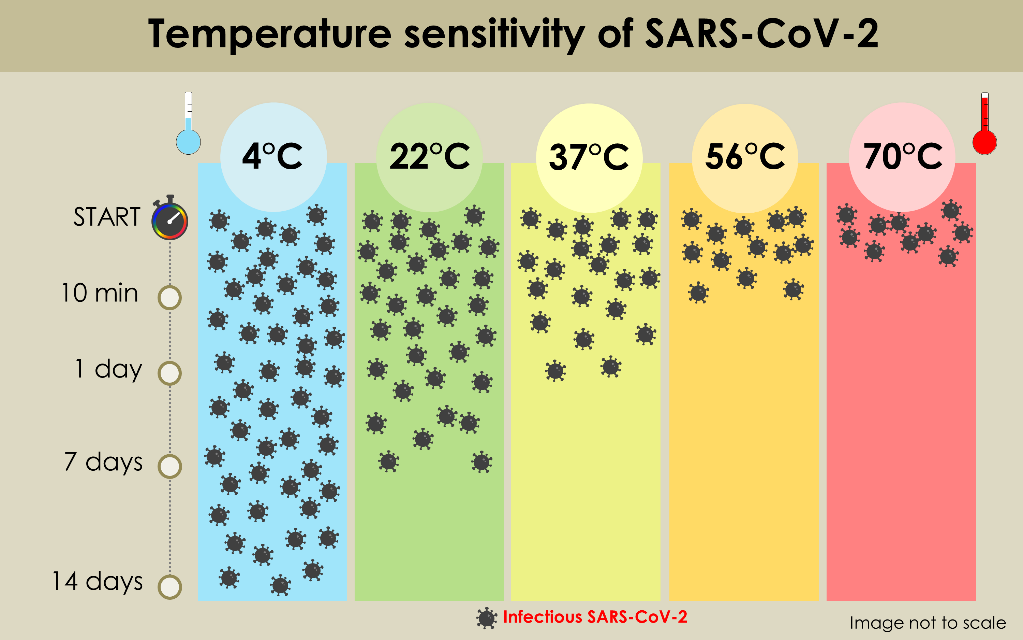 Based on findings from the School of Public Health (The University of Hong Kong), here is a graphical representation of how changes in temperature affect the virulence of SARS-CoV-2 when grown in the virus transport medium. [Illustration: Preethi Ravi]

Many other variables such as humidity, the kind of material that the virus rests upon (other than droplets) and the disinfectants used to clean such surfaces confound the stability of the virus. For instance, the same study found that infectious viral particles could be recovered from masks, banknotes, smooth surfaces such as plastic and stainless steel even after 2 days. On the bright side, household disinfectants could effectively destabilize them within minutes. Thus, soaking cloth masks in hot water for a minimum of 5 minutes and cleaning surfaces with disinfectants such as household bleach (5%) may be able to wipe out most of the virus.
The findings in the paper indicate that SARS-CoV-2 has some temperature sweet spots when maintained in the viral medium. But high temperatures and proper use of disinfectants could be its Achilles’ heel.
Importantly, one must remember that these observations have come from controlled laboratory conditions. Things can be quite different in a dynamic real life scenario. Hence, it would be oversimplified and imprudent to extrapolate from such a study. For instance, a lion’s share of the virus exists and replicates in the human body. Thus, it would remain rather unruffled to changes in environmental temperatures. Also, epidemiologists’ opinion on the seasonality of SARS-CoV-2 is factious. Some studies conclude that higher temperatures decrease the rate of disease transmission.  Others feel that such hope is rather futile. In fact, one of the arguments is that even if SARS-CoV-2 were to follow a seasonal trend like its infectious cousins, it may only be mellowed in the northern hemisphere, but could well be making its rounds down under.
While we wait and watch what the next sweltering months have to offer, a vaccine or a drug is our best armour.

Preethi Ravi is a researcher turned science communicator. She completed her PhD in Neurogenetics from the National Centre for Biological Sciences, Bangalore. She is currently a freelance popular science writer, braiding her appetite for science and passion for writing. Twitter: @catchpreethir

Preprints and biological research in India: together in sickness and in health?

COVID-19: What happens inside you?

Researchers in Lockdown: (Not) Sitting back… looking ahead!