Understanding any biological process, including diseases such as COVID-19, requires research at different levels of biology - at the population level to understand the spread of disease, at the individual human level, the affected organs, the cells that are involved in the disease and the protein molecules of the cells. Protein molecules are involved in various steps of viral infection and multiplication, and the knowledge about the structure of protein molecules is critical in developing vaccines and drugs for treatment. Deciphering the structure of a protein molecule is like taking a photograph of the protein molecule using X-rays and electrons beams and it eventually shows the arrangement of thousands of atoms it is made up of. In the current papers, scientists have used these techniques to decipher the structure of proteins involved in the first step of infection to answer how the SARS-Cov-19 virus specifically attaches to human cells and how an antibody blocks this step. 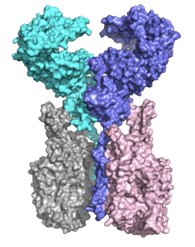 The SARS-CoV-19 virus specifically infects humans because the hACE2 protein, which is recognized by this virus, is produced only in humans. The entire structure of this critical hACE2 protein has been elusive. A group of scientists from China managed to get the structure of hACE2 by increasing its stability using another protein B0AT1 that interacts with hACE2 (Figure). They also went a step ahead and got the structure of hACE2 attached to the 'sticky piece' of S protein from the virus; the S protein (or spike protein) on the SARS-CoV-19 virus sticks to hACE2 protein of human cells and starts the infection. They found three interesting features - (1) the hACE2 protein structure is made up of two hACE2 molecules instead of one, (2) these two molecules are arranged in two different angles resulting in two different shapes of the hACE2 - open shape and closed shape, (3) the S protein sticks to hACE2 only in the closed shape and not the open. The S protein from the virus sticking to the human hACE2 protein is similar to a key (S protein) sticking into the correct keyhole and opening a lock (hACE2). Though we expect only one lock, surprisingly, in this case, two locks (with two keyholes) were found by the scientists and these locks are at different angles. The keys can enter the keyholes only in one angle. These structures are important because other scientists can now begin to find ways of preventing the S protein from sticking to hACE2 i.e. preventing the key from opening the lock. The second group of scientists tried to do precisely this.

Antibodies are proteins generated by a patient's immune system in response to an infection. Antibodies stop the infection by sticking to the key and preventing it from opening the lock. The aim of the second study was to see if an antibody from a previous coronavirus infection (SARS outbreak in 2002) can neutralize the current coronavirus infection. If yes, then this antibody could be used as a basis for developing one general vaccine for multiple coronaviruses instead of one vaccine for each coronavirus. This group from the USA got the structure of the 'sticky piece' of S protein attached to an antibody from a patient from the previous SARS outbreak. Surprisingly, the structure reveals that the antibody cannot block the S protein from sticking to hACE2 - though it does not prevent the key from entering the keyhole, it may prevent it from turning, which eventually stops the infection. This antibody prevents previous SARS infection, but it is not clear if it would prevent the current SARS-CoV-19 infection, and if it does then how does it work. Genetically engineered mice producing hACE2 protein would be the next testing ground for this antibody.